The Many Different Materials Used in Hip Replacement Devices.

If you need a hip replacement it’s best to educate yourself .

Metal on Metal (MOM) – These are what they sound like. Both the socket and the ball are made of stainless steel, titanium, chromium, cobalt or some combination of these. One sub-type of a MOM hip is a minimally invasive model which usually is smaller in size, so it can be installed with a smaller incision.

Polyethylene and Metal on Polyethylene (MOP) – Polyethylene is basically plastic, so these hips usually have metal structural pieces and a plastic liner where the ball and socket meet. They can also have a metal ball meeting a plastic socket liner. A sub-type of a polyethylene hip is made with a newer plastic called cross linked polyethylene, which is more durable.

Ceramic on Metal (COM), Ceramic on Ceramic (COC), Ceramic on Polyethylene (COP) – Ceramic hips are made of specialized and more durable versions of the same type of material that plates and bowls are made from. There are ceramic on metal, ceramic on ceramic, and ceramic on polyethylene versions. While these are durable, they can be vulnerable to fracture and breaking under big stresses.

If for some reason I would need a hip replacement, my single biggest concern would be wear particles. This phenomenon first came to light about 5 – 7 years ago when surgeons began to replace the first worn out or failed metal on metal (MOM) hips. What they found in some patients was scary. Basically, the entire area directly around the hip replacement device had turned into a mass of black goo.

Then studies were published showing that those microscopic metal shavings were leaching into the blood stream and causing elevated metal ion levels. Additional studies began to point out that some people’s tissue was so sensitive to this junk that they formed pseudotumors, which are basically big solid masses of irritated tissues, some of which could press on important nerves. Finally, genetic studies showed that not only was this tissue visibly unhappy, the cells were getting damaged at a genetic level from the wear particles.

When all of this first came to light, it looked like only MOM hips were involved. However, as the research below shows, the issue of wear particles extends to every type of hip made.

Before we begin, it’s worth noting that there is now a name for pissed off tissue caused by wear particles. In a 90s movie, a nuclear war head falls into the wrong hands and the main character is informed that this is called a “Broken Arrow”. He responds to the effect of, “I’m not sure what’s more disturbing, the fact that we just lost a nuclear warhead or that you actually have a name for this”. I feel the same about the fact that the orthopedic joint replacement community now has a name for wear particles that cause problems in patients.

In addition to highlighting research on wear particles, I’ll also look at the durability of each type. So let’s take a look at how to navigate this minefield.

MOM or “Metal on Metal”

The “bad boy” of hip replacement types is clearly MOM hips. The funniest thing is that despite all of the absolutely horrific things published about these devices, you can still find Internet ads for many surgeons who will be happy to implant them. They do this by claiming that these are “minimally invasive” hips. While there’s a tiny kernel of truth in that hogwash (the incisions needed to implant them are smaller), there is nothing minimally invasive about amputating a joint and inserting a prosthesis, no matter how you skin that cat. In addition, the smaller the device, the bigger the wear particle issue.

MOM hips produce metal wear particles locally that are then taken up in the bloodstream. In general, smaller MOM hip devices (usually those used for small framed women) have a higher likelihood of producing metal wear particles. This study showed more metal ions in the blood with MOM devices compared to conventional hip replacement prostheses. This randomized trial again demonstrated more metal ions in the blood of women with MOM hips when compared to conventional hip replacement, but also noted that pseudotumors occurred both around these MOM devices and the more conventional MOP devices as well. This recent study showed that metal debris was present in both large and small MOM hip replacement devices. 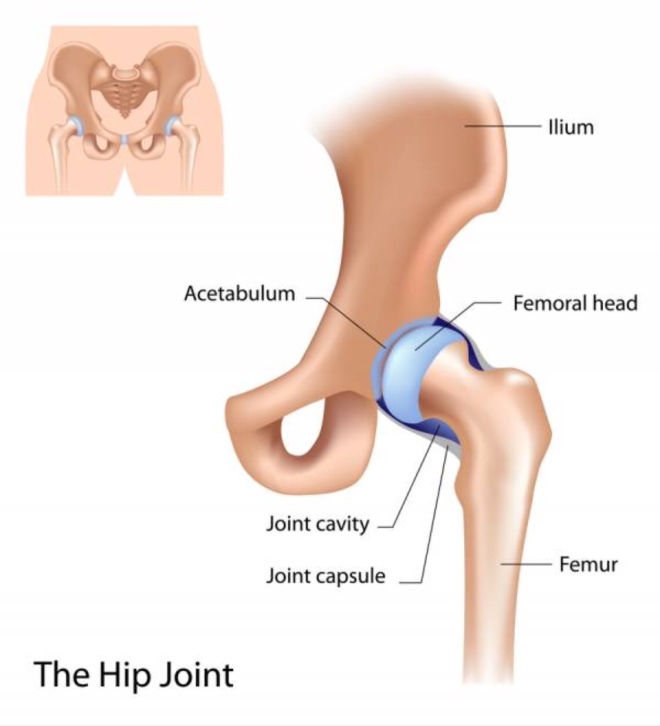 Photo from Breaking Muscle It’s all in the hips

The latest 2015 consensus guidelines are now not to perform a MOM hip replacement in small women or anybody with a known metal allergy. The latest study on MOM hips and pseudotumors concludes, “Adverse reactions to metal debris in MOM hips may not be as benign as previous reports have suggested.” Not good.

When I initially began this literature search, I thought that MOP hips may be better in the wear particle department. After all, you don’t have metal rubbing on metal, but usually metal on plastic. However, I was wrong.

To see how bad things can get with MOP wear particles, I didn’t have to look far. This recent study from 2014 showed an awful side effect of both polyethylene and metal wear particles, a pseudotumor that invaded a woman’s vaginal tissues. This 2015 study was very concerning in that it compared MOP hips to MOM hips with regard to metal levels and chromosome damage in cells. It couldn’t conclude that one was better than the other. Based on this 2014 study, MOP hips wear less, but their wear particles produce slightly more tissue reaction than MOM hips. This is all consistent with a recent study I blogged on, showing that conventional polyethylene wear particles reduced stem cell activity in bone marrow and muscle.

If there is one bright spot in this category, it’s likely the newer highly cross linked polyethylene (HCLP). Based on this recent study, HCLP hips produced fewer wear particles than regular polyethylene. In another study of shoulder replacement devices, the lower debris for these devices was confirmed. In addition, based on this 2014 study HCLP devices seem to withstand unexpected wear and part failure better.

Maybe ceramic is the way to go? After all, what could go wrong with installing a hip replacement device made of the same substance as dinner plates?

This 2015 randomized trial showed that COM hips still regrettably produced metal wear particles that ended up in the blood stream. Some good news for COM hips could be found in this 2015 study. It concluded that while there was swelling around these devices, when compared to minimally invasive MOM hips, there were no pseudotumors seen in COM hips. However, based on this analysis of many studies, there doesn’t seem to be any advantage of COC compared to COP. How does COM and COC compare? Ceramic on metal doesn’t seem to have the same durability as ceramic on ceramic based on this study.

Is Your Surgeon Being Paid to Promote a Certain Type of Hip?

One of the real challenges in navigating this landscape is that regrettably, joint replacement devices have been one of the worst areas of payola in medicine. As reimbursements have declined for the surgical procedures of installing and replacing devices, many surgeons have figured out that they can keep their cash flow stable by taking money from the device manufacturers. This has been the subject of many Department of Justice lawsuits through the years.

The big issue for patients is how to know if their surgeon is recommending a hip device because they really feel that it’s the best, or because they’re getting paid by the company making the device. This Propublica web-site will allow you to research your surgeon’s payment history.

It’s very clear from reviewing the medical research on this topic that a poorly sized hip device is a huge problem for many reasons. First, it will reduce the longevity of the device. Perhaps more importantly, it virtually guarantees more harmful wear particles. And since we’re talking about replacing your hip, a good fit is common sense.

Given the modular nature of these hip devices and the wide array of options, a poor fit should never happen. However, in my experience, hardware fitting issues usually happen when the operating room and/or hospital don’t have the correct size in stock on the day of the surgery. So agree before hand on the size of the components and make sure the staff has double-checked to make sure the hospital has that size in stock.

The upshot? All hip replacement devices produce wear particles. But which is best? It’s clear that when metal on metal implants go bad, things can go very bad with a local tissue reaction that can cause pseudotumors and high metal ions levels in the blood. If I had to get my hip replaced, I would cross this type of implant off my list. Ceramics still produce wear particles and have the added problem of fracturing in an active individual. Polyethylene wear particles in a MOP hip can be just as bad as those from a MOM hip. Given that highly cross linked polythylene has the least wear particles, this is likely the winner. However, realize that not as much is known about tissue reaction to cross linked polyethylene, so that recommendation may change with time. In addition, there are newer types of ceramics that once mated with HCLP could produce less debris.

One thought on “Material Used In Hip Replacements”